First published in the Newtown Review of Books (18 July 2017), my review of Nike Sulway’s luminous novel, Dying in the first person.

This is a powerful and extraordinarily beautiful story of family, love and sacrifice. Sulway has created a world we enter slowly, uncovering the past and its hurts in small steps. It draws the reader into a place of mystery and wonder as Samuel is brought face to face with an emissary, Ana, who brings news of his long-estranged twin brother.

We learn of Morgan’s death in the canal near their home in Amsterdam in the opening lines —‘A woman came across the field, carrying the body of my brother, who had drowned.’ Ana’s first contact is through letters, then telephone calls. Samuel and his mother, Solange, have had no first-hand contact with Morgan for many years but on accompanying Morgan’s body back to be buried, Ana stays, allowing herself to rest, to be loved. In Sulway’s depiction of her growing relationships with Samuel and Solange, there is a longing and vulnerability that all readers will recognise.

Sulway explores ideas of sacrifice and the accompanying notions of obligation, commitment and entitlement; these are part of loving somebody. Her characters’ offerings to those they love are almost biblical in their scope—life, freedom, memory and voice—but we can see echoes of them in our own lives. We all make huge, yet unrecognised, sacrifices every day, for love.

It is through the book’s gradual unfolding that we learn of Morgan’s life, his self-imposed isolation from his family and why and how he died. Ana’s complicated relationship with Morgan is teased out. Ultimately, she has wanted to save him: ‘I believed I could rescue him, restore him to himself, simply by being patient and kind.’ Sulway’s examination of Morgan’s mental state reminded me of Jeffrey Euginides in his 2011 book The Marriage Plot where Madeleine, who wants to save Leonard, is told: ‘But you can only save yourself.’ Sulway is acutely aware of our limitations in treating emotional pain.

The book’s central theme is the power of language. Sulway portrays its role, through narrative, in recording truth, or lack of truth, which then, in turn, allows us to see reality and change and grow. As children, the boys develop a secret language, sophisticated and complex. As adults, Morgan writes books in this language and becomes famous; the language has taken on a life of its own, studied by linguists, the focus of international conference. His books are translated by Samuel who is conflicted about his role in appropriating words not his own. Who owns these stories?

As boys, they had developed an entire world in this secret language—the island of Nahum—inhabited by men only. Sulway’s examination of the roles of men and women, their strictures and freedoms, is light and deft. She never hammers home a message, leaving nuance and murkiness to allow us to reach our own conclusions. While her attachment to her women characters is evident—Solange, in particular, her talents, intellect, resourcefulness, independence—she tells her story through men and their agency. Women’s stories and powers, the influence of a mother in shaping her children, is always present but in the background.

One spring morning,’ my brother would intone, holding his tiny craft aloft in this wide, pale hands, ‘the father leaves his son sleeping and goes to the sea. He does not know, when he steps onto the deck, whether he will return, whether it will be a good day, or a bad day, but he goes down to the sea, because that is what men do.

And at the end, we are left with Ana’s sacrifice, her selflessness as she, too, goes into the storm.

Sulway’s writing is beautiful and evocative. She forces her readers to slow their pace, to absorb every detail through her recreation of scenes in real time precision: the trappings and formalities of a funeral, the basting of a turkey.

In the kitchen, our mother laid out her ingredients, as well as her needles, skewers, scissors and string, her long-handled, flat-faced spoons and glass bowls. She had taken out her recipe form its hiding place, where it lay folded all year, cheek-to-cheek with a page clipped from the newspaper in 1949, which had detailed instructions on how to truss a turkey. Once everything was in place, she opened a bottle of dry Semillon, poured herself a shallow, golden glassful and began.

In many ways, this is a book about the complexity of human relationships and the little that children ever really know of their parents’ lives. 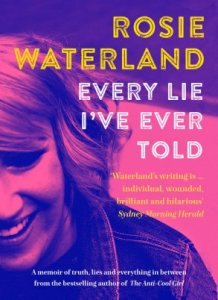 In Every Lie I’ve Ever Told (2017), Rosie Waterland tells stories from her ruptured childhood, first laid bare in her 2016 memoir The Anti-Cool Girl, interlacing them with intelligent, wickedly funny observations about being a woman today.

As the daughter of addicts, Waterland was neglected and abused; she went to 17 schools, lived with violence, and was hospitalised in a psychiatric ward. Where The Anti-Cool Girlis the story of her survival, this book marks a maturity that comes with self-knowledge. Waterland learns from her experiences and, in recounting her shortcomings and flaws, she asks us to think about ours. Her examination of grief, trauma, sex and relationships is evidence of a woman who does not flinch from introspection. Every lieis also the story of her love for her best friend, Tony, whose sudden death brought home to her sanity’s wafer-thin fragility.

It’s uncomfortable enough to have to get naked from the waist down, lie down on a table and spread your legs as far as they will go. But it’s even worse when you do that and the heavily made-up technician looks directly into your snatch and lets out a big, unimpressed sigh. “This is going to be difficult, she says, wincing now….”

Yet, she muses, the counter-argument is that ‘waxing your pubes is a powerful example of the autonomy you have over your body.’ How can women today work out who they are with so many contradictory messages?

Waterland struggled with eating disorders in her twenties. In her chapter on body image and thatFacebook photo, she asks again, Why is what we look like more important that what we do? But there isn’t time to think about answers in today’s 24 hour media-blitzed world. While her nude selfie caused a media frenzy, her accompanying considered examination of society’s skewed obsession with women’s bodies was all but ignored. It’s not new, but I’m so glad she’s asking these questions again, and to a new readership.

Just don’t be too fat, too skinny, too sexy, too prudish, too aggressive, too passive. Be a role model for all other women but be modest enough to never think you’re a role model. Have it all, but also admit that it’s impossible to have it all.

As a former writer for Mamamia, she used to be part of that world, ‘the Fast-Food Opinion machine’ but having taking a step back, she is now struck by the sheer volume of meaningless drivel, aka ‘content’, that it generates. She asks us to think about its harm— the cruelty of labelling people, of defining a complex life with a tag.

Waterland is acutely aware that her own change in attitude has come only after she has been personally hurt.

(I know – how narcissistic to only realise the error of my ways after I was the subject of media scrutiny. Scrutiny that I had participated in countless times. But I got there in the end, at least? I’m ashamed to say that’s the best I’ve got: I did get there in the end…)

After Tony’s death, she told people that she was ‘okay’, but she was drowning, not waving. Her subsequent breakdown and suicide attempt brought home the biggest lie of all—that her ‘mental-illness story was one of past recovery, not current struggle.’

‘Recovered’ means it’s over, I’m good now, I can talk about this because it’s only in my past. That girl was a crazy lady. This girl is fine. I’m okay.

Her acknowledgement of her vulnerability is a powerful contribution, both for those living with depression and anxiety and those caring for them. I read her book at the same time as Alain de Botton’s The Course of Love (Hamish Hamilton, 2016) where he discusses the human predilection towards delusion: we in the Western Anglophone world would do well to learn more about our character traits, our insanities which are deeply embedded in our psyches. Rosie Waterland’s clear-eyed reckoning of her life meets his challenge head-on. ‘Let’s all embrace failure. Let’s all accept that we can only be perfect at being imperfect. That’s about as close to ourselves as we’re ever going to get.’

First published in the Newtown Review of Books. And Rosie, a Newtown resident of old, liked it too.  Read more on her Facebook page.