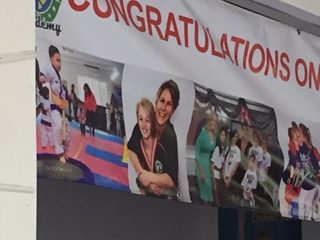 My  taekwondo school, the Australian Martial Arts Academy, has been in operation for 35 years this month. I’ve been training there for six years and have a few ideas about its staying power.

I was asked recently whether taekwondo gave me a ‘workout’. The quick answer is yes! But you can answer that question on a few levels.

As a 1980s teenager I did my share of cardio fitness aerobic classes (New Body, Step, anyone?) Taekwondo does that and more. We drip sweat! Depending on the teacher, outside air temperature or any other variable (and the Grand Master can be unforgiving in those weeks after Christmas), expect 20­–40 minutes of heart-pounding exercise. And we do it to music! I’ve never figured out who puts together the workout tracks, but hats off. They’re great.

While kicks are adjusted for belt colour, everybody is pushing it. Powerful repetitions of a white belt kick can be as exhausting as a senior belt kick. We add technique onto technique, building up combinations of punches, kicks, spins, jumps and occasionally gymnastics moves (who would have guessed that learning cartwheels as a kid would be so useful now!)

We all train together. As a beginner, I learned so much from the black belts’ patient tuition in class. I love giving back now, and helping others is one of the best ways to remind yourself of the techniques again.

The sheer pleasure in ‘getting’ a technique is something you’d never get in boot camp. I remember my incredulity in first learning a double turning kick: this is a turning kick on one leg, immediately followed up with a second kick with the other. What? How can I bring up that leg before I’ve even landed the first? It’s now second nature. And you move on, learning and applying more difficult skills. It’s impossible not to smile watching someone master something new. And the breadth of the curriculum makes this workout different. In any class you could be learning kicks, self-defence moves, sparring….or meditating.

I was once captain of my school tennis team. While I still think it is a beautiful game, those moments when I revelled in my control and skill seemed too rare. In taekwondo, you don’t need a partner or an opponent. You’re competing against yourself. Showing up, training, perfecting a technique will only matter to you, in the end.

And the real difference? We’re asked to reflect on who we are, and where we’re going. Setting goals in life as well as sport is the backbone of Australian Martial Arts’ operation. It’s working for me.

This site uses Akismet to reduce spam. Learn how your comment data is processed.